The New Voices Legislation has passed . . . it is the law.  Now what? See the KNOW THE New Voices Washington presentation to see how the new law impacts students, advisers, administrators and school boards.

There is so much to know about the New Voices Law that has recently gone into effect. Please find some resources within this article AND on the Resources page of the website. 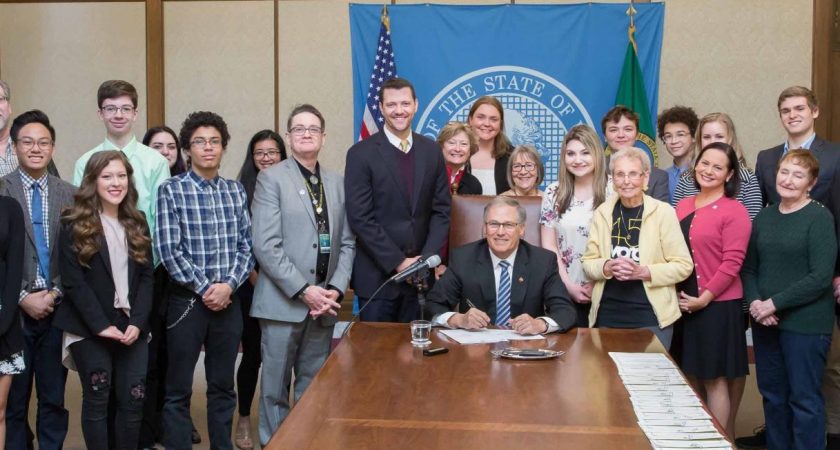 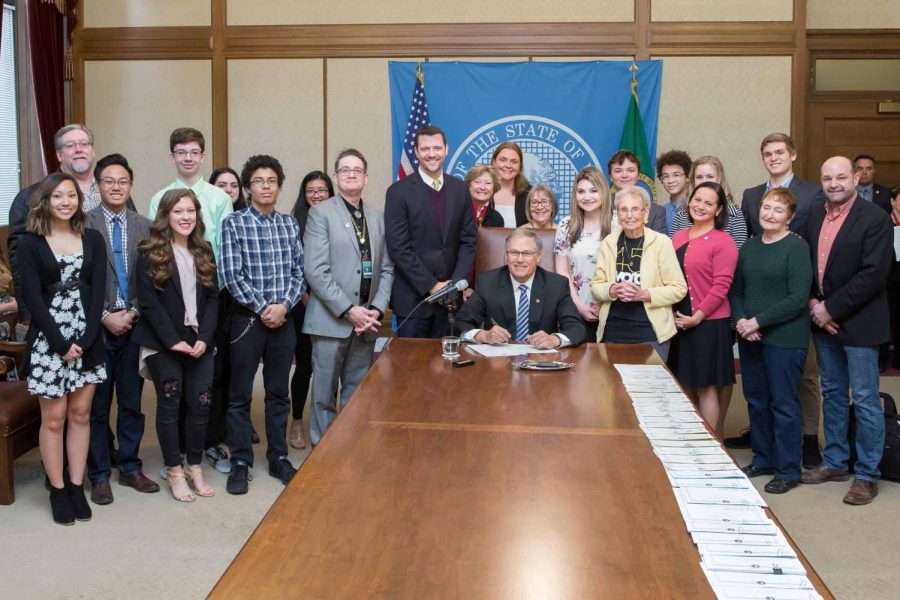 As a result of decades of work, student journalists will now receive first amendment protections like their professional peers after legislation sponsored by Sen. Joe Fain was today signed into law. The change makes Washington the 14th state to extend free speech protections to student journalists. Fain’s bill was supported by current and former student reporters and editors, journalism teachers and free press advocates, many of whom were on hand at the Capitol for the bill signing.

“Students deserve a chance to investigate and write stories that are relevant to them without wondering if their work will be censored,” said Fain, of Auburn, who sponsored the bill after meeting with journalism students at Auburn High School in 2015. “This new law, which was passed because of the engagement and advocacy by students, significantly strengthens journalism education in our state.”

Under the legislation, student editors would be responsible for content, which Fain called appropriate as they learn how to participate ethically and honestly in the conversations of a civil democracy.

“This bill means the world to me,” said Mariah Valles, a journalism student at Central Washington University and former editor of the Auburn High School newspaper. Valles, an advocate for the legislation, testified before multiple legislative committees in recent years. “I’m thankful that I had the opportunity to represent student journalists of the past, present and future.”

The issue stems from a 1988 U.S. Supreme Court ruling in Hazelwood School District v. Kuhlmeier where the court held that school-sponsored student expression, including school newspapers, did not occur in a traditional public forum and therefore could be regulated. Despite the federal precedent, states have the right to provide greater protections.

“The state of Washington sent a clear message that the first amendment rights of students are central to a high quality civic and journalistic education,” said Tom Kaup, a journalism adviser at Auburn High School, who introduced the issue to Fain. “This is a fabulous day for student press rights in Washington and we all appreciate Senator Fain for championing this new law.”

The legislation previously cleared the Senate in 2017, with it finally earning approval in both chambers this year. It is modeled off of policies passed by North Dakota in 2015, placing the responsibility on student editors to determine content so long as the content is not libelous, illegal, or would disrupt the educational environment of the school.

“I first worked on a similar bill in 1992.  In all our previous versions, it would get close to passing and then get hung up in a committee,” said Fern Valentine, former chair of the Washington Journalism Education Association. “Senator Joe Fain visited Tom Kaup’s publication classes where they have worked under an open forum policy for many years. This bill gives student journalists the right to cover any topic responsibly, while clearly spelling out what they can and cannot do. It also protects advisers and administrators. Students should be given the unique learning opportunities student led publication classes offer. The clarity of the language in this new law makes these questions easily answered. Now our job is to spread the word.”

The legislation goes into effect in June. 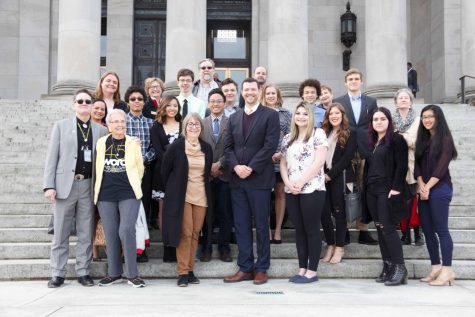